Vince gets inspiration from his world travels

Vince just got back from Honolulu, where he had some life-changing tonkatsu! He’s recreating it tonight on Shmeal! Get your request in for his “Katsu Katsu Katsu!” and get to know him in this cook Q&A!

Q. What can you tell us about your cooking background?

Vince: I’m self-taught and cook tons for friends and family. At about 11 my mom taught me how to prep and cook an omelet (Velveeta cheese, peppers, onions ham and mushrooms), and I’ll never forget the lesson. It allowed me to really understand the principles of food prep, timing and flavor. To this day, I think cooking with eggs is the most difficult.

From then on, I watched the Food Network relentless and tried making those dishes that stirred my imagination and appetite for my little brother. Eventually my family had me cook every Thanksgiving and Christmas meal. For special occasions, I’m their go-to cuisinier.

Q. What inspired you to make “Katsu Katsu Katsu!”?

Vince: My recent trip from Hawaii! The best dish I had was tonkatsu in Honolulu. I honestly had to take a moment to compose myself after my first bite. It was super juicy and flavorful, and I’ve been craving it since I got back last week.

Vince: Good question! A recency effect usually gets the best of me, but my trip to Spain with my brothers in 2015 stands out most. We ate our way through Barcelona, Seville, Granada and Madrid, and Spanish cuisine has been my favorite since! It seems silly to some, but the simple tomato bread served as an appetizer at nearly every restaurant became my new addiction. It’s bread toasted with a drizzle of olive oil, rubbed with fresh garlic, topped with grated tomato and finished with a little more oil and sea salt. Pan con tomate is as humble as tapas can get.

Q. Who’s your favorite person to cook for?

Vince: My boyfriend, Vin. But you can’t tell him! Haha. He likes trying new foods but also has an aversion to ethnic or “fishy” flavors. So whenever I cook something new (which is often) and he enjoys it, I feel like I hit it out of the park. I take pride in the fact I introduced him to the foods he now likes most: sushi and Filipino food. 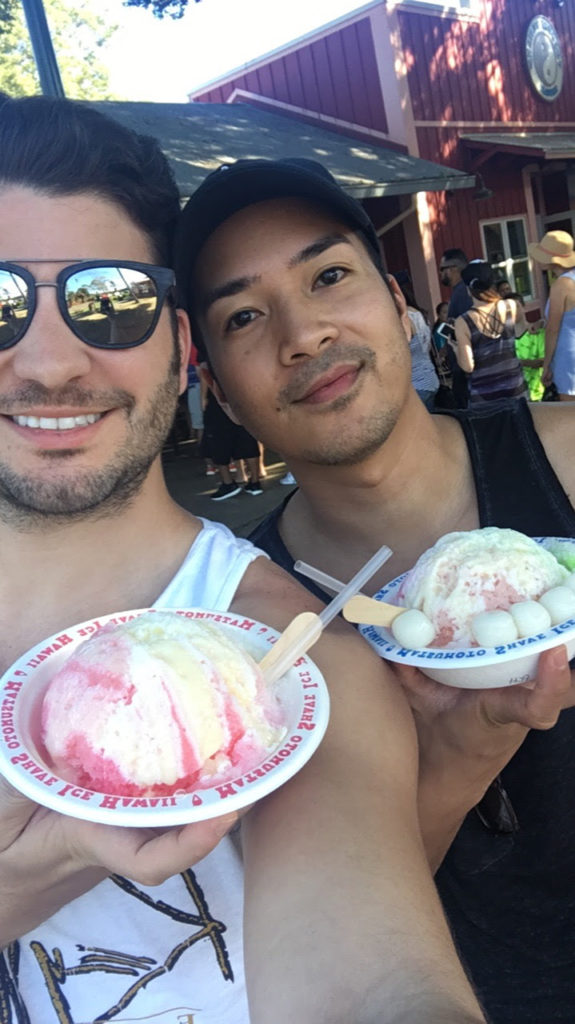 But also, I like cooking for my friends, JC, Michelle and Jaq. They’re fantastic cooks, and we constantly challenge ourselves with large, complex meals at get-togethers. Some of the most exquisite dishes I’ve ever tasted were made by them. And I’ve always felt cooking for and with them elevates my game. It’s one of my biggest hopes to open a restaurant with them.

Q. What do you think about when you’re in the kitchen?

Vince: Growing up in a Filipino household, other cuisines interested me most, not because I didn’t like Filipino food but, because it intreagued me. My family immigrated from Manila to Chicago when I was 8 years old. So when I arrived, EVERYTHING fascinated me. Everything was new, and I wondered at all the American or Japanese or Italian or other food I never had growing up in the Philippines. And so, I became slightly obsessed with trying new things.

Which brings me to what, in my opinion, is the best thing about traveling. You’re literally transported to a new world. Authentic experiences and unique flavors kick you in the mouth, and you’re left with an impression you don’t ever want to shake off. And when it comes to food, I want whomever tastes what I make to have the same feeling. I even think about how I can make comforting, familiar dishes seem new and exciting.

Q. Anything else we should know about you and your cooking?

Vince: My phone is filled with THOUSANDS of food pics and recipes.

I have competed and won both the SOHO House Chicken Shop Chopped competition and its All-stars competition.

Get Vince’s “Katsu Katsu Katsu!” tonight in West Ridge, and follow him to see what he makes next!

Made with in Chicago